Rory Dow, Alex Ng and I went to Cameron Highlands for Odonata sampling two weeks ago. I quite like the pleasant cold weather for field work, no annoying mosquitoes and leeches. However, we had to bear the cold nights sleeping in forestry quater at Tanah Rata. We covered areas at altitude 600-2000 m - a lot of hard work of climbing up steep forest streams. We encountered a few highland species including Calicnemia chaseni, C. rectangulata, Ortherum trinagulare, Aristocypha fenestrella (also found at low land) etc. We will produce an Odonata checklist for Cameron Highlands as soon as we have the data sorted out. 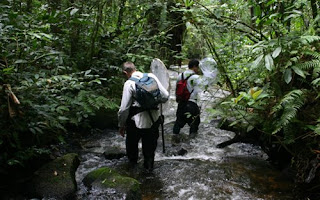 Rory (left) and Alex (right) walking along a forest stream. 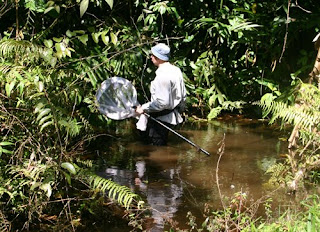 Rory is submerging himself in a swampy pond looking for dragonflies.
One day we carried out our sampling at Gunung Berinchang (the peak is 2031 m high). We started from the peak by walking all the way down to the foot hill - a total of 9 km of distance. It was indeed a tiring walk...... but I managed to snap a few nice views along the walk.

view of the surrounding areas from the peak of Gunung Berinchang. 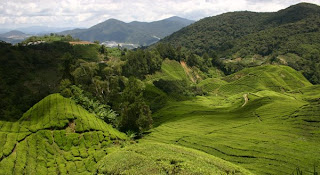 the tea plantation at Gunung Berinchang is spectacular.
Posted by C.Y. Choong at 9:48 PM