This photo was taken four years ago when I just started to learn about dragonflies. I was at a field trip to some part of Taman Negara in Kelantan. I spotted this nice green guy just emerged from its larval stage. You can see that this guy is very lazy because the larva didn't climb up high on rock or twig to emerge. Instead, the larva was just too comfortable sitting on sandy spot covered with some very thin layer of water (stream). The photo was taken around 10.00 evening along a forest stream. It is Megalogomphus sumatranus recognizable by its green colour thorax. Megalogomphus sumatranus is truly a forest dweller, and it likes fast water with gravel beds. 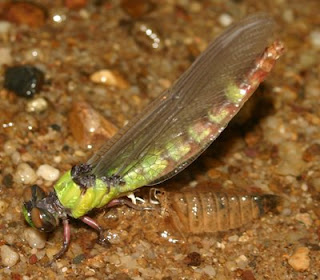 a newborn waiting for day ahead

Larval emergence is a critical process. Some odonate species prefer to emerge in the night while the others are quite comfortable having it during day time. However, not all the emergences are successful. I spotted this dragonfly (Ictinogomphus decoratus) half covered in its casing without sight of life. I guess the emergence started at least six hours earlier, and for some reasons the process of emergence was terminated half way, and the dragonfly naturally died in its casing. I was staring at the half buried dragonfly in its casing for a long while thinking the struggling it had to go through before giving up......... yes, it was almost there, but......... 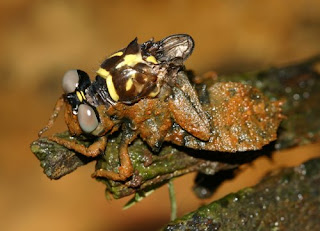 I caught this cute libellulid larva from a leafy shady pond. It is still surviving in my aquarium. I keep my finger cross in hope it will emerge soon. OK, it is quiz time again - what is the species of this larva? Well, I will only give out the answer after the larval emergence :). So, stay tune.......... 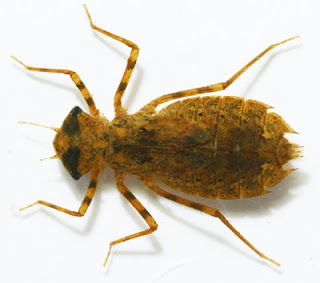 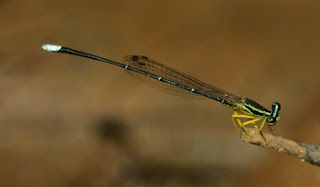 Email ThisBlogThis!Share to TwitterShare to FacebookShare to Pinterest
Labels: Platycnemididae

They are on Fly

I spotted this pair of dragonflies in an open pond. I guess they are a couple. The front one must be a female and the back one should be a male then. So, the male is chasing the female...... for mating :)

They are Pseudothemis jorina which could be easily recognised by its yellow/creamy bar marking on the abdomen. Both male and female P. jorina have similar marking. Pseudothemis jorina is a highly active species, and they hardly pearch to enjoy peaceful sun and breeze...... 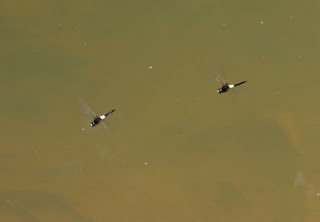 Email ThisBlogThis!Share to TwitterShare to FacebookShare to Pinterest
Labels: Libellulidae

I have been carrying out observation on the Odonata diversity in Bangi Forest Reserve for over three years. Not until last week, I noticed the presence of Ceriagrion chaoi at a forest edge shady pond. Ceriagrion chaoi is said to be a rare species. Well, its presence in Bangi Forest Reserve really enchants the forest. The male C. chaoi has red abdomen while the female is rather in olive green colour. 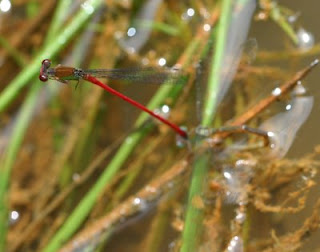 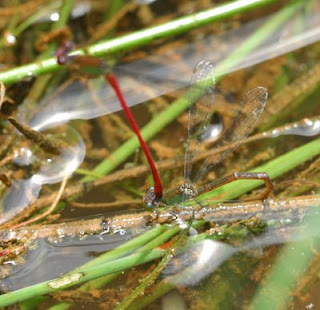 A tandem pair with the female ovipositing 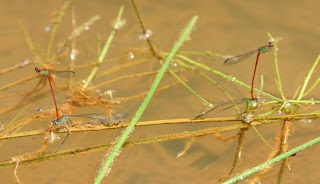 Email ThisBlogThis!Share to TwitterShare to FacebookShare to Pinterest
Labels: Coenagrionidae, In Tandem, Oviposition 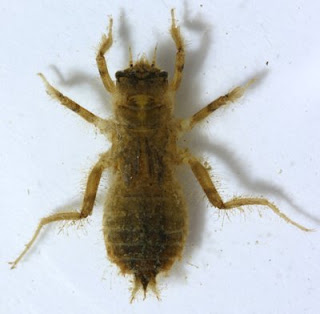 I posted an entry on a damselfy larva (below image) on 8 March, 2009. The larva has emerged. The species identity of the larva is....... Argiocnemis rubescens! It is a female of A. rubescens. You may see the adult A. rubescens here. 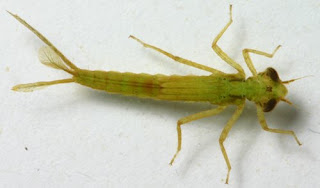 Orthetrum chrysis are having fun!

This pair of Orthetrum chrysis (family Libellulidae) is in the middle of mating. The male has deep red colour but the female is in brown colour. Orthetrum chrysis is one of the most common dragonfly species in Peninsular Malaysia. 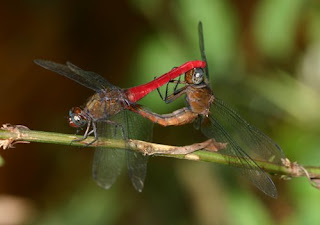 Email ThisBlogThis!Share to TwitterShare to FacebookShare to Pinterest
Labels: In Wheel, Libellulidae

I collected a beautiful exuvia from a swampy pond in Bangi Forest Reserve. The exuvia has beautiful spiky abodmen. It is a characteristic of Hydrobasileus croceus (family Libellulidae). 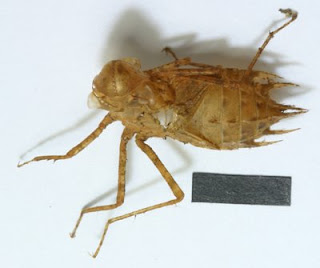 However, the adult H. croceus is not as impressive as the larva because it has brown/yellow colour. The unmistakable marking on hind wings identifies the species easily. 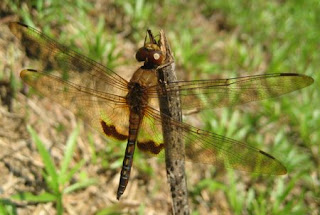 I caught this larva from a leafy muddy swampy pond. It is identified as Ictinogomphus decoratus belonging to family Gomphidae. The adult I. decoratus can be viewed here. 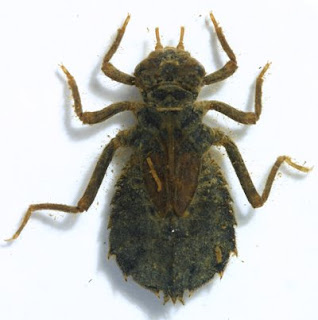 Argiocnemis rubescens are Having Fun!

I was hanging around a swampy pond at Bangi Forest Reserve with my camera hanging at my neck, and I spotted this pair of Argiocnemis rubescens couple having fun. Spontanously, I took a few snaps on them. They formed a beautiful wheel. The male has nice clear blue marking while the female is rather dull with yellow/brown colour. Argiocnemis rubescens is in the family Coenagrionidae. 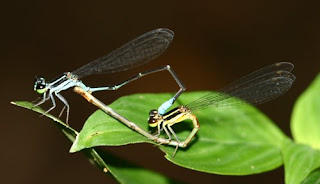 Email ThisBlogThis!Share to TwitterShare to FacebookShare to Pinterest
Labels: Coenagrionidae, In Wheel

I caught a greenish yellow damselfly larva from a swampy pond in Bangi Forest Reserve. The larva looks quite matured. I guess it will emerge soon. What is the species of the larva? Is anybody putting up a guess? Well, I will let you know the answer when it emerges.

Email ThisBlogThis!Share to TwitterShare to FacebookShare to Pinterest
Labels: Larva

I spotted a male Podolestes orientalis preying on a male Copera vitatta. The P. orientalis really enjoys its delicious meal..... so pitty the C. vitatta. 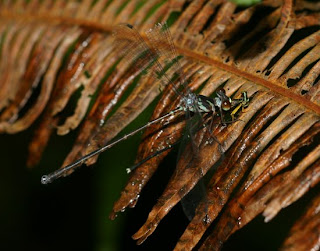 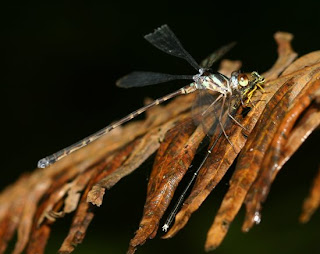 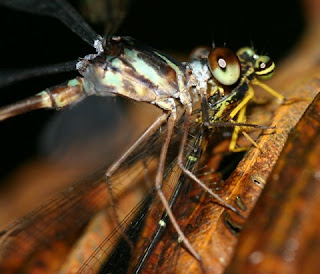