The paper of the description of Podolestes orientalis larva has finally been out. Please let me know if you need the soft copy of the paper.

Choong, C.Y. and Orr, A.G. 2010. The larva of Podolestes orientalis from West Malaysia, with notes on its habitat and biology (Odonata: Megapogrionidae). International Journal of Odonatology 13(1): 109-117.

The abstract of the above article is as below:
The larva of the south-east Asian megapodagrionid, Podolestes orientalis, is described and figured. Specimens were collected from shallow forest pools lined with large dead leaves in secondary lowland forest. Final and earlier stadium larvae were found concentrated around the edges of pools in very shallow water. Larvae sometimes perched in exposed situations, just below the water surface, with abdomen upturned and caudal lamellae splayed outward to expose the broad respiratory surfaces. This represents the first account of the immature stages for this south-east Asian genus. The caudal lamellae are very broad and flattened, inserted horizontally, suggesting a close relationship between the genus Podolestes and Australian region megapodagrionids. 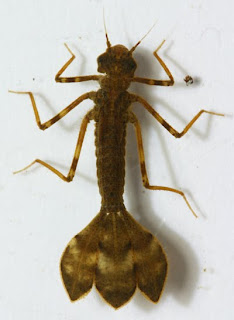 Below are two photos taken in situ at the natural habitat of P. orientalis larva. 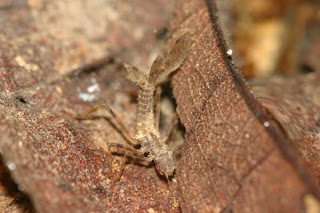 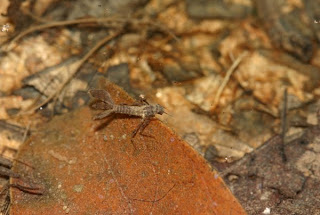 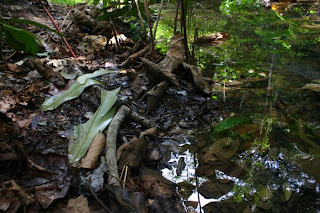