I have been doing sampling throughout Malaysia for the past five years. Whenever, Chalybeothemis fluviatilis was encountered, it was always present in one or two individuals. However, I was taken aback when I saw so many C. fluviatilis along Sg Bebar. In Peninsular Malaysia, two Chalybeothemis species have been recorded: C. fluviatilis and C. chini. C. chini is a newly (in 2007) described species from Tasik Chini (a site not too far from Sg. Bebar) 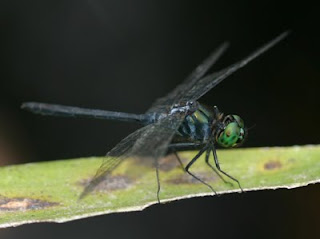